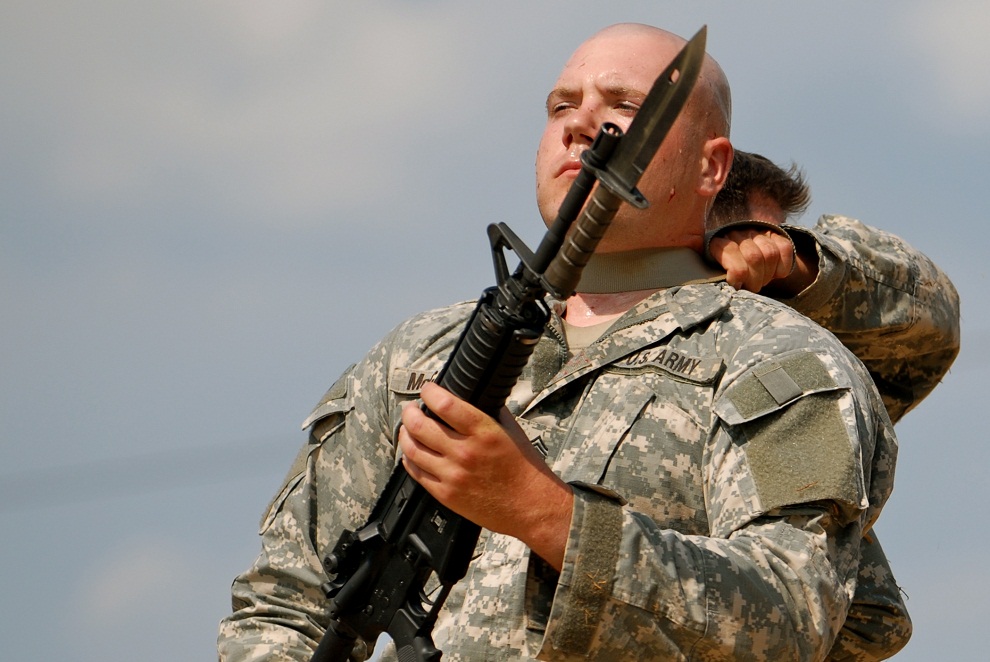 The U.S. military, even with severe and ill-advised budget cuts, remains the deadliest fighting force in the world.

And the tip the spear, the deadliest of those deadly, are America’s unconventional forces: U.S. Special Forces.

The proud lineage of the Special Forces, and in particular the Army Rangers, can be traced all the way back to the French and Indian Wars.

As recounted in the Navy SEALs article:

Rogers Rangers were notorious for their reconnaissance and quick strike tactics. By 1759 Major Rogers had codified the basics which can be found in the “Standing Orders for Rogers’ Rangers“:

1. Don’t forget nothing.
2. Have your musket clean as a whistle, hatchet scoured, sixty rounds powder and ball, and be ready to march at a minute’s
warning.
3. When you’re on the march, act the way you would if you was sneaking up on a deer. See the enemy first.
4. Tell the truth about what you see and what you do. There is an army depending on us for correct information. You can lie
all you please when you tell other folks about the Rangers, but don’t never lie to a Ranger or officer.
5. Don’t never take a chance you don’t have to.
6. When we’re on the march we march single file, far enough apart so one shot can’t go through two men.
7. If we strike swamps, or soft ground, we spread out abreast, so it’s hard to track us.
8. When we march, we keep moving till dark, so as to give the enemy the least possible chance at us.
9. When we camp, half the party stays awake while the other half sleeps.
10. If we take prisoners, we keep’ em separate till we have had time to examine them, so they can’t cook up a story
between’ em.
11. Don’t ever march home the same way. Take a different route so you won’t be ambushed.
12. No matter whether we travel in big parties or little ones, each party has to keep a scout 20 yards ahead, 20 yards on each
flank, and 20 yards in the rear so the main body can’t be surprised and wiped out.
13. Every night you’ll be told where to meet if surrounded by a superior force.
14. Don’t sit down to eat without posting sentries.
15. Don’t sleep beyond dawn. Dawn’s when the French and Indians attack.
16. Don’t cross a river by a regular ford.
17. If somebody’s trailing you, make a circle, come back onto your own tracks, and ambush the folks that aim to ambush you.
18. Don’t stand up when the enemy’s coming against you. Kneel down, lie down, hide behind a tree.
19. Let the enemy come till he’s almost close enough to touch, then let him have it and jump out and finish him up with your hatchet.

The Army Rangers were reborn some 182 years later, at the onset of WWII “…with Allied Forces anxious to gain a foothold against the Axis war machine,  U.S. commanders searched for ways to strike back.”

Brigadier General Lucian K. Truscott Jr. was tasked with building a super infantry patterned after the British Commandos. The forces, in keeping with American military history, were called Rangers.

3,000 men volunteered for the new fighting force, and guided by British Commandos in Scotland, entered a harsh training program. The program culled out the less than extremely hardy and iron-willed and yielded a core of only 500 men.

The training of those first unconventional forces set the standard of grueling and stressful training that endures today.

Side note: There was much debate during the inception of these special forces over the intent. Should a few qualified troops receive advanced training, then return to their conventional units to fight? Or should the hyper-skilled warriors be in separate, quick-strike, lethal units?

The latter concept prevailed and the Ranger Regiment was born.

The first unit ashore in the ’42 Allied invasion of northwest Africa was the 1st Ranger Battalion led by Colonel William O. Darby. Darby won the respect of every Ranger under his command as he led with exceptional planning and bravery.

Though not always well-loved by the other infantry officers who were irritated when Darby would entice the best men to join his Rangers, his tactics and courage earned universal admiration.

The Rangers today are known as the 75th Ranger Regiment and as described by the Army:

The 75th Ranger Regiment is a lethal, agile and flexible force, capable of conducting many complex, joint special operations missions. Today’s Ranger Regiment is the Army’s premier direct-action raid force. Each of the four geographically dispersed Ranger battalions is always combat ready, mentally and physically tough, and prepared to fight our country’s adversaries.

“Simply, the mission of the U.S. Army Ranger is to kill…destruct and eliminate threats, potential targets.”

“The dangers that we face will basically be the fact that we’re going behind enemy lines usually…we go into their back yards most of the time.”

The Ranger Regiments have 4 locations:

Becoming a Ranger is extremely difficult, as Samuel Southworth and Stephen Tanner note in their excellent primer, U.S. Special Forces:

The Ranger tab (a curved black patch bordered in gold with letters spelling out “Ranger”) is among the most coveted, as well as low-key, of all patches, but when you see it you know the man wearing it has been trained to fight harder than all other troops and to let nothing stand in his way.

Ranger training consists of 65 days of ever-increasing stress and difficult physical requirements augmented by lack of food and sleep. The venues include Fort Benning, Fort Bliss, Elgin Air Force Base, with the differing locations allowing for conditions of desert, mountain and jungle warfare.

Only 30 of every 100 men who start Ranger training make it through to the end. But those few who do — those iron-willed overcomers — can proudly wear the Ranger tab.

Every man and woman who serves in the U.S. Armed forces deserves our honor and support.

But if you ever see a man quietly wearing that ordinary-looking black and gold Ranger tab, you should know you’re beholding a very UNordinary warrior.