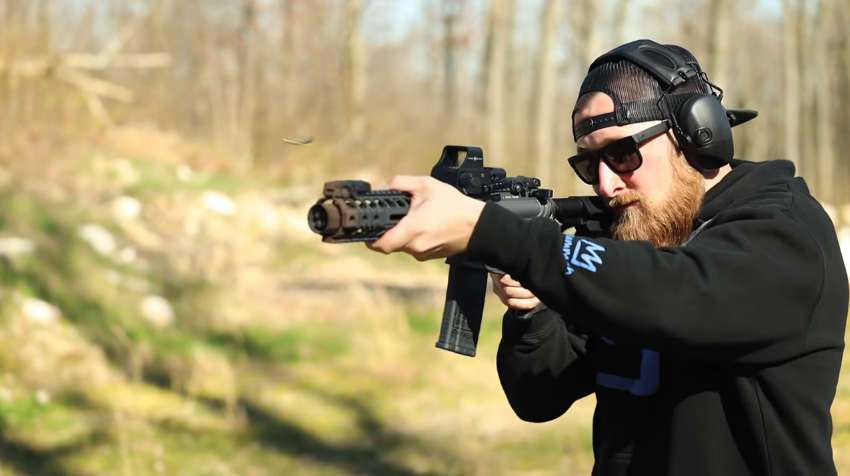 AR pistols, in general, make good home defense firearms. The short configurations make an AR pistol easy to maneuver inside a home. The AR pistol retains enough weight to make recoil manageable for most shooters. When chambered in the 5.56 NATO round, penetration of the bullet after shooting is not as big a problem as most people think. The Wilson Combat ARP (AR Pistol) Tactical pistol is an outstanding choice for home or vehicle defense and exhibits the accuracy and attention to detail for which our tactical rifles are known. Thi...

The Pros and Cons of AR Pistols for Home Defense

Looking Deeper – How do the Pros and Cons Affect Your Choice

You need to delve deeper into these pros and cons to understand their relationship to your needs and preferences.  What may seem like a major issue may be much less of a factor than you may have thought at first. A bit of discussion of each of these pros and cons is worth your while.

It doesn’t matter what sort of firearm you chose for home defense. You must get the proper training and engage in good practice to become proficient. We aren’t talking about the mechanical operation of the AR pistol as an advantage in home defense.

What is significant about the AR pistol platform is the ease with which a homeowner can effectively put the AR pistol to use in the stress of a home invasion. AR pistols offer a significantly longer sight radius than handguns, giving them an advantage at self-defense distances.

AR pistols are heavier than most handguns. Couple the extra weight with the relatively gentle recoil of the 5.56 NATO cartridge, and you get a firearm that is much easier for most people to control. Better control means more shots on target, even in an extremely stressful situation.

Moving around a home or apartment with a full-length AR or shotgun can be difficult at best. It takes special training and a good deal of practice to become proficient at handling a long gun in confined spaces.

A standard AR rifle with a 16-inch barrel will measure 36 inches overall, give or take half an inch. Most shotguns are even longer. An AR pistol typically has an overall length of just 25-inches. This difference may not sound like much, but a shorter length is a huge advantage when maneuvering around doors and furniture.

Magazine Capacity is A Real Factor

Anyone experiencing a real home defense situation never complains about having ammunition leftover in their firearm at the end. The typical AR pistol uses a standard AR magazine with a 30 round capacity.  A 30 round AR magazine is usually double the number of rounds of most semi-automatic pistols.

The popularity of the AR platform has spawned a huge aftermarket for accessories. You can find almost anything to bolt or snap onto your AR pistol, from lights to lasers. The most popular accessories for AR pistols include

And don’t forget custom paint and finish jobs to give your AR pistol that one-of-a-kind look. The biggest danger with adding accessories to your AR pistol is the tendency to go overboard and load up your firearm with so many gadgets and options that it becomes too heavy to use effectively.

The Problem of Safe Storage

Safely Storing an AR pistol can be a challenge for many people. Handguns fit nicely into a small pistol safe in a nightstand. Because of its length, an AR pistol usually requires a much more elaborate and costly storage system.

Some states require more elaborate storage of firearms. Be sure that you check with your local authorities about the storage requirements where you live.

The Single-Handed Wield – Not an Option for Most AR Pistols

Despite the name AR pistol, these guns are not one-handed weapons. The weight and balance of an AR pistol make one-handed shooting almost impossible for most shooters. On the other hand, a proper handgun shooter will almost always employ a two-handed grip when shooting. Offhand pistol shooting is a skill most casual shooters never develop.

A reasonably decent self-defense handgun can be hand for under $500. An AR pistol fit for home defense can cost more than twice the price of the handgun. Home defense shotguns can be purchased new for even cheaper than a reasonably priced handgun.

Noise – Something to be Considered

All guns are noisy. Overall, any gun discharged in an enclosed space can damage your hearing. Overall, AR pistols tend to be noisier than many other guns generating decibel levels that can affect your hearing after only one shot.

None of us would think about going to the range to practice without hearing protection. However, in the stress of a home invasion scenario, there may not be time for this. You must be aware of the dangers in your choice of firearms for home defense.

On the other hand, one loud and scary shot from an AR pistol may be all that is necessary to cause an invading bad guy to turn and run.

What About Penetration – Isn’t that A Danger to Others?

Anytime you discharge a firearm in a home or apartment, there is a worry about the bullet penetrating walls. What many don’t realize is that the ballistic characteristics of the bullet are a big factor in the problem of penetration.

Many handgun calibers use big, heavy bullets with much greater penetration power than the 5.56 NATO round used in most AR -pistols. It is the ballistic characteristics of the .223 bullet that work in its favor for home defense.

Speed and Mass – The Big Differences

The 5.56 NATO round fires at small .223 bullet that usually weighs only 55 grains. Also, this lightweight bullet leaves the muzzle at extremely high speeds. The high speed and lightweight mean that much of the bullet's energy dissipates at the first contact with anything. The bullet may fragment or begin to tumble, making it much less of danger to anyone downrange.

The Ultimate Goal – The Protection of you and your Family

In the end, the deciding factor is what is best for your protection and the safety of your family. For many, the AR pistol is an excellent choice for home defense. The one bit of advice we leave you with is that no matter what firearm you chose for home defense, you must train and practice regularly to be proficient.