Concealed Carry Tactics: The Class Every CHL Holder Should Attend 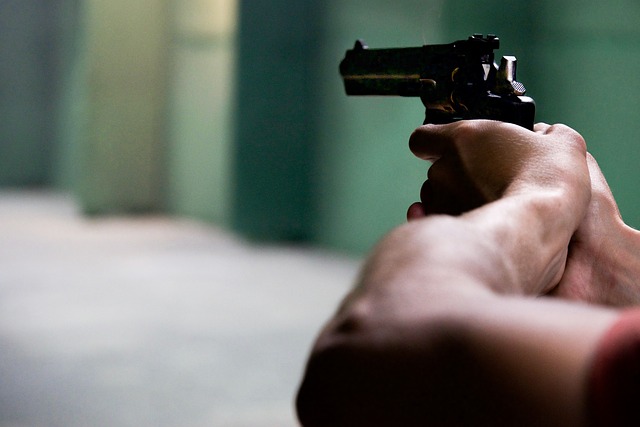 As my Southwest Airlines flight taxied to the gate in sunny Phoenix, mixed emotions of excitement and trepidation dueled in my head.

By now, more and more in the shooting and military communities recognize my name as the gal responsible for ROBAR Guns content, social media and marketing. And this trip had three-fold purposes: I would speak about “Winning the Media War” at a Tea Party event; I would visit the ROBAR shop again; AND I would attend the Trident Concepts‘ Concealed Carry Tactics class.

I was equal parts elated and nervous about the CC class. Like many folks in the shooting, civilian community, I had learned to shoot initially from NRA certified instructors, had attended an NRA Basic Pistol class and passed both the written and shooting tests with flying colors.

I knew I could go to a range, keep the muzzle pointed in a safe direction, and, at my leisure throw some lead down range in a somewhat accurate group at closer distances.

As a relatively small woman (5’2″ and a buck 25) who lives alone, I wanted to take ownership of my own self protection and any innocents around me. I wanted to be a sheepdog.

Jeff Gonzales, President and Owner of Trident Concepts, is a former Navy SEAL and Gunsite Range Master. He is one of the best instructors within the circle of “Tier One” Firearms Instructors. He also has the most demanding standards bar none. When I want to be challenged and pushed to the next level of my shooting abilities I train with Jeff, hands down.

ROBAR founder and owner, Robbie Barrkman, his wonderful wife, Lisa, and GM Freddie, have become great friends. Robbie is a world class shooter, Lisa is also an excellent shot, and Freddie is a Marine AND Gunsite Rangemaster. Enough said. All three encouraged me to have fun and enjoy every minute of the class.

Freddie supplemented the necessary loadout and drove me out to Cowtown Range Friday morning; the class was scheduled for 0800 – 1800 Friday through Sunday.

I scanned the area and quickly realized I would be the only woman in the class.

One attendee builds world-class 1911′s, another was a police officer, and all of the guys looked tactical to me. They soon learned that I was associated with ROBAR and would be taking pictures and writing about the event, and gave me permission to take their pictures.

What the others and Jeff may not have known at the onset, was that I was dead serious about improving my semi-auto pistol skills and learning, REALLY learning how to draw from low-profile concealed carry.

Jeff sat us all (me, Freddie, Danny, Mike, Rick and Jason…Shannon had a schedule SNAFU and joined up on Saturday) down for the 1st hour plus and explained that everything in the course would be based on military experience.

The tsunami of knowledge he poured out in that initial briefing was hard to assimilate: concealment levels, loadout based on threat condition, daily carry as a lifestyle, power v. concealment (recommended defensive rounds of 9mm, .40 and .45), continuity of weapons systems, method of carry (OWB, IWB, appendix, hip), holster material and more. Much, much more.

I kept telling myself:

“Tam…stay humble, remember every word. This dude is a warrior; pay attention!”

We also learned the range commands, some being:

After the initial briefing, Jeff instructed us to charge our magazines (50 rounds was a full load), holster our empty pistols (I was using Freddie’s Glock 19 Gen 3 for the class), and assemble at the 3 yard line down range.

Freddie, Jeff and I had a plentiful supply of great quality 9mm ammo thanks to Richard Gans of Atomic Ammo in Phoenix. My budget is so tight, I was EXTREMELY grateful for those rounds (the class requires 1000 rounds of serviceable ammunition).

Once on the range, I took a deep breath, willed myself to man up and concentrate. But boy did I have a lot to learn.

My grip was sufficient, but not optimal, as evidenced by the many ensuing malfunctions and stoppages (NOT jams, people) on Friday. I was the blonde on the range and a regular malfunction junction. If the line of shooters was told to make ready, but not fire, all heads turned toward me.

This was my own mini-crucible: my sub-optimal (Jeff instructed that was the nice way of saying WRONG!) grip was not allowing the polymer Glock to cycle properly.  Add to that, by mid-day I had some VERY optimal blisters (some blood blisters which popped…if CSI inspects your Glock, Freddie, there will be traces of blood).

The good news? By Saturday my grip was much improved, the malfunctions limited, and when a stoppage DID occur I could tap, rack and roll and resume fire.

I won’t go into all of the details of the course — you’ll need to sign up and learn first hand.

But we learned how to draw properly from both our OWB holster and IWB holster, how to clear the garment for the draw (t-shirts, polos, button downs, hoodies and jackets), how to draw in a car or restaurant and more.

We learned to rack the slide violently and holster softly (the holstering took longer to learn). We also learned the proper usage of small flashlights with strong hand only shooting.

We practiced chest shots and face shots and failure drills from varying distances: as can be expected, the shot placement accuracy was greatly diminished at the 25 yard line.

My shooting was reasonably accurate from the 3 and 5 yard lines: my goal is to become AS accurate at the 10, 15 and 25 yard lines.

This course was an absolute saturation class, every bit of information invaluable.

The guys in the class were terrific shooters, and all of them encouraged me throughout the 3 days. By Sunday, Jeff knew I meant business and could see marked improvement in my mechanics and results.

I was not a little bit shocked when I hit the 8″ metal target at 25 yards in the duel drill (2 shots per shooter, the first to hit the target with both shots wins the round). I didn’t win, but I DID hit the target on 3 of my 8 tries.

On the flight home, sad to leave both the sunshine and my wonderful friends, my mind was racing and reconsidering what I had learned.

My grip was solid, I was (mostly) not slapping the trigger but rather taking out the slack and pulling in a controlled manner, I could hear the trigger reset, I could perform a combat reload decently, I could draw properly and reholster.

Before the class I was one of millions of people who believe in the Second Amendment, who love to shoot, and who want to take ownership of my own protection. But I lacked the skills to do so in a safe and efficient manner, skills which would stop a threat without danger to myself or other innocents.

The Concealed Carry Tactics class, taught so well by Jeff Gonzales, gave me the foundation and basic skills to eventually carry daily in a low-profile.

I would admonish EVERY single shooter who has not had a CC tactics course to do so before carrying: the weapon will only fend off threats if your skill is appropriate to do so.

As for me? I’m a work in progress. But I’m thrilled to be farther down the road, closer to my own daily, low-profile, loadout routine.

All thanks to Jeff (and Freddie and Robbie who made this trip and class possible).

I may not quite be a sheepdog yet, but I will be. Mark my words.