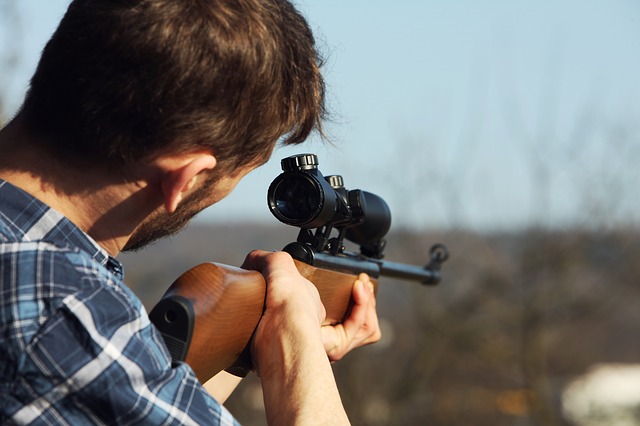 “LET ME SHOW YOU MY BORCHARDT,” ROBERT BARRKMAN TELLS ME NOT LONG AFTER MEETING HIM AT HIS GUNSMITHING AND METAL COATING OPERATION, ROBAR, IN PHOENIX.

It might seem odd to bring up the world’s first commercially successful auto pistol in a predator-hunting magazine, but it illustrates that Barrkman’s gun knowledge is not only wide, but also deep.

There aren’t many of these pistols in the world, especially not in the 95ish percent condition of Barrkman’s, which is why when I asked him if he was going to shoot it, I was pleased to hear him reply, “Of course.” Barrkman is a custom gunmaker, but he doesn’t build “gun cabinet queens” — instead he builds uncompromising guns made for a hard day’s work.

That way of thinking is how Barrkman started in the gunsmithing trade when, as a shooting instructor at the legendary Gunsite academy under the tutelage of Jeff Cooper, Barrkman began fixing students’ handguns if they broke down during the demanding shooting sessions in the hot, dry desert of northern Arizona. From opening the first “Gunsmithy” at Gunsite, Barrkman went on to work with the renowned ri- flesmith Gale McMillian and eventually set up his own shop in Phoenix.

There, he and a team of six gunsmiths he personally trained build guns such as the SR60 and SR90 used by SWAT and military units, and it’s that same type of demanding experience ROBAR uses to build the SR21 rifle that I was there to consider as a contender for a predator rifle.

ROBAR SR21 rifles are “built to order,” meaning there’s a base con- figuration and then almost anything goes, and at the time of my visit there was one in .308 Winchester ready to test fire.

While the .308 is clearly not a top cartridge choice for predators, trigger time with it provided valuable insight into the quality and potential of a ROBAR- built rifle. At the heart of the SR21 is a Remington 700 action. ROBAR can provide one or you can send your own, and you can use either a short or long action depending on what chambering you want. Gun-smith Marty Enloe is the designated builder of SR21 rifles and explained several of the accurizing steps ROBAR takes before putting their name on a gun and backing it with a 1/2 MOA accuracy guarantee.

First is a series of action-truing operations commonly referred to as “blueprinting” that make sure Marty has a trued and squared action as the foundation for everything else that goes into the build. Those operations include facing the front of the action and recutting and surface grinding the recoil lug. Those steps eliminate misalignment of the action to its axis and, when combined with chasing the action threads, make it possible to install a quality barrel equally straight.

Also trued are the bolt-locking lugs. If you remove the bolt from your favorite factory bolt-action rifle and look at the rear surface of the lugs, you might be surprised at how little and uneven the wear is. That lopsidedness can translate into inaccuracy, which is why Marty laboriously laps the lugs on SR21 builds so they’re equally square and have full contact.

Equally critical is having a quality barrel, and currently Marty favors using 24-inch match-grade ones from Lilja. Inside the action, everything gets a coating of NP3, which is a super-slick electroless nickel-based finish that deposits sub-micron particles of PTFE (Teflon) along with the nickel. This particular finish is known for plating on evenly so it doesn’t undo any of Marty’s painstaking efforts, and it’s super hard and corrosion- resistant.

The accurized barreled action is mounted in a MDT TAC21 modular chassis so that the only contact is between the receiver and V-shaped bedding blocks and at the recoil lug area. This ensures accuracy and repeatability, and the generous clearance around the for-end means that even the largest practicable diameter barrels are free-floated.

It’s a pretty smart-looking design — something like a hybrid bolt-action and AR-15 — with clever features like a quick-release buttstock for easy bolt removal and a cutout so you can use the conventional Remington 700 safety. If you’re the type of gun enthusiast who likes the natural beauty of Circassian walnut, then this chassis is probably not going to appeal to you, but it will to those who like or have been brought up on the AR-15.

It comes standard with a MagPul MIAD grip and PRS buttstock that you can adjust for comb height and length of pull, and you can easily change those out with any AR-15 stock or grip to your liking. It also takes ultra-reliable Ac- curacy International detachable magazines. The lightweight modular forend comes with two 5-inch M1913 Picatinny rail panels and has mounting positions at 3, 6, and 9 o’clock so you can easily attach accessories such as a bipod, flashlight or sling swivels.

For long-range shooters, the top monolithic rail has a 20 MOA slope, and it’s long enough to set up night-vision optics on the same plane as your day-vision optics if you hunt predators under the cloak of darkness. Completing the package is the customer’s exterior finish choice of satin grey NP3; matte or satin black Roguard; tan, dark OD green; or gunmetal grey Poly-T2.

These are all some of the most advanced finishes in any industry and all have a lifetime warranty. On the range ROBAR’s marketing director, Justin Sheriff, had arranged for the two of us, along with ROBAR pro-staffer Joe Nassetta, to meet up with Marty at a local range, where Marty was test-firing customer guns and where we could sight-in the sample SR21.

While there, Marty made it obvious how seriously he takes ROBAR’s accuracy guarantee when he showed me one of the groups he had just fired with a customer’s rifle. Two shots were touching and a third shot was about half an inch high and to the right of those two.

“That’s not good enough,” Marty said, “It can do better.”

Joe fired the first three shots our SR21 rifle had ever fired into a half-inch cluster at 100 yards, so it looks like Marty might or might not have a few tweaks to do before he’s satisfied with it. Either way, it didn’t take long for us to decide that shooting the SR21 on the 100-yard square range was like swimming in the kiddie pool, and we headed over to the Cowtown range in nearby Peoria where we could take long shots at unknown distances and at varying angles.

Despite its angular, mechanical lines, this is a comfortable gun that you can really lock yourself into for a steady shot. Even though Joe’s about twice as big as Justin and I’m somewhere in between, we didn’t need to adjust the comb height for any of us to see clearly through the Leupold Mark 6 3-18x44mm scope.

Likewise with the length of pull, which is more a testament of how ergonomic a pistol-grip stock is than how much Jus- tin could stretch or Joe could scrunch up. The trigger was Remington’s X-Mark Pro that Marty had adjusted to a smart 21⁄2-pound pull, and it cracked like ice.

Joe’s excellent shooting ability with a rifle this accurate, combined with his experience at doping wind and range estimation, had him smacking small gongs as far as 800 yards right away, and he had Justin and me shooting equally well in short order. One could quickly become very confident taking long or surgical placement shots with a gun like this.

As tested, the SR21 weighed 111⁄2 pounds, which I think is too heavy for a predator rifle. Since these are custom builds, there are things you could spec to cut weight without compromising performance.

I asked Marty how light he thought he could make such a gun and still retain that 1⁄2 MOA accuracy guarantee. He was pretty confident that 8 pounds was possible, and while still not a “walking” predator rifle, that’s a lot more manageable for a method of hunting that can have you on the move as much as you are stationary.

My question had a visible effect on Marty, and I could almost see the wheels in his head turning as he was possibly envisioning a more compact, lighter version of the SR21. “Now you got me thinking…” he said, and that is where we left it.