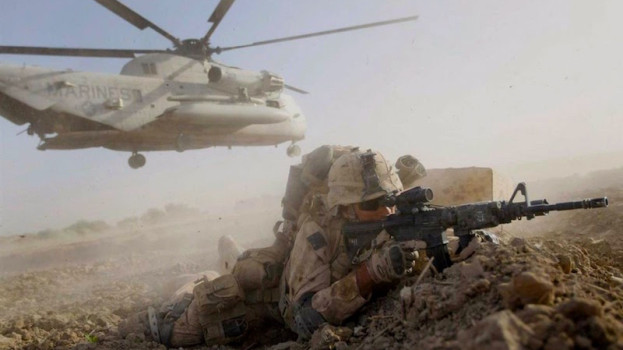 Every branch has born heroes, every branch brings unique responsibilities and skill sets for the defense of our nation and her interests around the world.

The tip of the spear of U.S. Armed Forces are the Unconventional Forces, or U.S. Special Forces.

One branch is unique among the branches: the Marines.

The United States Marine Corps was established under a resolution approved by the Continental Congress on November 10, 1775, to augment naval forces in the Revolutionary War, and Samuel Nicholas was made the 1st Commandant.

Capt. Nicholas made the rounds of public inns and taverns throughout Philadelphia to recruit. An early taker was Robert Mullan, the Tun Tavern owner. The Tavern on Water Street in Philadelphia is considered to be the birthplace of the Marines.

The United States Marine Corps was originally founded as an infantry unit stationed aboard Navy ships, responsible for the safety of the ship, crew and officers. The duties and scope of the Corps changed and grew over the decades.

In spite of a reputation of success, the Corps was abolished at the end of the Revolutionary War due to budget constraints. Congress ordered the (re) creation of the Marine Corps on July 11, 1798, and placed it under the command of the Secretary of the Navy.

The Marine Corps birthday was celebrated on July 11 from 1799 until 1921, at which time the original founding date, November 10, was honored going forward.

The Corp had 2 early mottos, Fortitudine (meaning “with courage”) prior to the War of 1812, and Per Mare, Per Terram (by sea, by land).

In 1883, at the prompting of Colonel Charles McCawley, the 8th Commandant of the Marine Corps, the motto “Semper Fidelis” (always faithful) was adopted.

To this day Semper Fi is synonymous with Marines.

The Marine Corps has been America’s expeditionary force in readiness since 1775. They are forward deployed to respond swiftly and aggressively in times of crisis. Marines are soldiers of the sea, providing forces and detachments to naval ships and shore operations.

Marines are global leaders, developing expeditionary doctrine and innovations that set the example, and leading other countries’ forces and agencies in multinational military operations. These unique capabilities make them “First to Fight,” and our nation’s first line of defense.

And the famous USMC approach:

Every Marine is a rifleman, trained first as a disciplined warrior regardless of military occupational specialty. This training is key to our philosophy of maneuver warfare.

The feats of Marines are known far and wide, including their major contribution to victory in the Battle of Belleau Wood.

On 26 June, the 3rd Battalion, 5th Marines, under command of Major Maurice E. Shearer, supported by two companies of the 4th Machine Gun Battalion and the 15th Company of the 6th Machine Gun Battalion, made an attack on Belleau Wood, which finally cleared that forest of the enemy. On that day, Major Shearer submitted a report simply stating, “Woods now U.S. Marine Corps entirely.”

The nickname Devil Dog supposedly originated from the German soldiers descriptions of the Marines at Belleau Wood, reporting Marines fought like ”Teufel Hunden” or “Hounds from Hell.”

World War II was a major coming out party for the Marines: instead of their shipboard security roles, they became America’s main force against Imperial Japan.

A better understanding of the critical role the Marines play in our nation’s defense: the Corps was largely a “parallel force” and the first quick reaction force.

As Samuel Southworth and Stephen Tanner describe in their book, U.S. Special Forces:

“…capable of rapid deployment around the world, they have traditionally provided the U.S. presidents an option to project power without acknowledging a state of war.

When the United States mobilizes its army and air force, the entire world spills its coffee.

But ‘sending the Marines,’ which has been done literally hundreds of times in our history, is acknowledged as a crisis solver, meant to quell a conflict rather than escalate it.”

It’s impossible to talk about the Marine Corps without a mention of Lieutenant General Lewis “Chesty” Burwell Puller.

Chesty Puller was a “veteran of the Korean fighting, four World War II campaigns and expeditionary service in China, Nicaragua and Haiti.

The LtGen was one of the most decorated Marines in the Corps, and the only Leatherneck ever to win the Navy Cross five times for heroism and gallantry in action.”

General Puller served in the Corps for 37 years, and garners praise and respect from Marines nationwide.

His sayings are the stuff of battle lore:

“They are in front of us, behind us, and we are flanked on both sides by an enemy that outnumbers us 29:1. They can’t get away from us now!”

“Don’t forget that you’re First Marines! Not all the Communists in hell can overrun you!”

Since 1922 the USMC has had a mascot, an English Bulldog (thanks once again to those defeated German soldiers at Belleau Wood).

“Jiggs’ formal title was, in fact, ‘King Bulwark’, which might have made him, upon enlistment, the only Marine ever to outrank the Commandant.”

But General Butler sensibly demoted the bulldog to the rank of private, doing away with the aristocratic nomenclature.

In 1957, the Marine Corps’ mascots began to bear the name Chesty, after the aforementioned top dog Marine, General Puller.

At the same time, the Marine Barracks in Washington, the oldest post in the Corps, became the new home for the Corps’ mascot, and Lewis B. “Chesty” Puller Jr. was a hit with everyone, including the media.

The next installment in the series will cover more Marine history, the 12 weeks of training, and the history/training of Marines with Marine Special Operations Command.

What does it take to become a Marine?

Stay tuned as the US Special Forces: Marines and MARSOC continues and learn exactly what the recruits must conquer to gain the privilege of wearing the blood stripe, to wear the eagle, globe, and anchor.

After all, the Marine emblem is not just a picture or pin…it represents “pride, honor, integrity, and being able to carry on the traditions for generations of warriors past.”